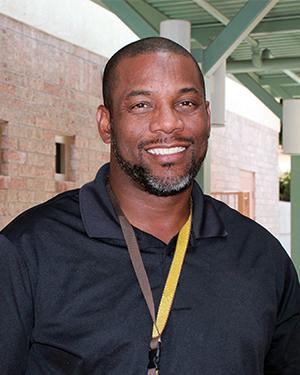 Mr. Jermaine Whitaker has been in education for over 20 years and with Tempe Union for 15 years. Before joining MHS, he was the Drop-out Prevention Coordinator and head girls basketball coach at Marcos de Niza. He also has experience as a business teacher at Marcos and in Yuma. He also was a special education teacher in Paradise Valley. Whitaker has a bachelor’s degree in Business Administration with an emphasis in management from New Mexico Highlands University, and a master’s in Educational Leadership from the University of Phoenix.

Mr. Whitaker had a very decorated collegiate athletic career. Jermaine Whitaker attended NM Highlands University where he played football. During the 1992 season, Jermaine led the Cowboys to their winningest season in a decade, going 7-3-1. He had over 3000 total yards, with more than 2700 yards passing and he threw 24 TDs. He followed that up with an RMAC All Conference selection in 1993 as he led the RMAC in passing with 2,700+ yards total and 23 touchdown passes. When Jermaine returned for his senior year in 1994,he was a pre-season All American, he made RMAC Player of the Year, and made the RMAC All Conference Team. And his offensive production stayed at almost 3000 yards passing, total yardage of over 3000 yards, and he again threw for 23 touchdowns.

"I’m very excited to join the Charger community and I look forward to building on the successes of McClintock’s athletic programs.”