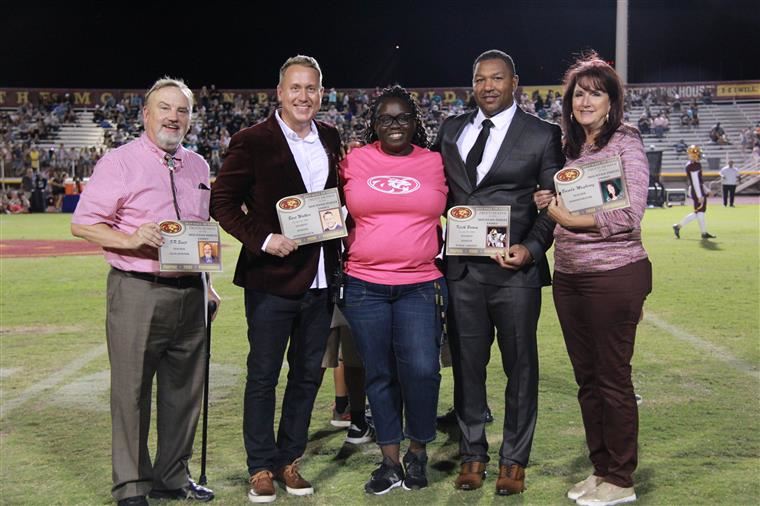 An army veteran, a Chandler firefighter, an entrepreneur and the Pride’s first female principal were all inducted into the Mountain Pointe Hall of Fame.

The Hall of Fame ceremony, now in it's 9th year, recognizes former staff and alumni for their continued demonstration of Purpose, Pride and Performance after leaving campus. Former faculty members KR Scott and Brenda Mayberry, as well as Pride graduates Keith Brown (Class of '95) and Bart Walker (Class of '97) were the 2019 Hall of Fame inductees.

In his 20 years at Mountain Pointe, KR Scott taught various sections of social studies, coached an award-winning academic decathlon team, and established Tempe Union’s first gifted program and Mountain Pointe’s tutoring center. He also served in the U.S. Army for over 20 years prior to his time with the Pride. He retired from teaching in May of 2013 and now serves as a freelance education consultant.

“It was within the hallways of this school where I learned the greatest lessons of my life,” KR said during the Hall of Fame ceremony. “[My former students] made me the person that I have become.”

Brenda Mayberry was a teacher at several TUHSD schools, and served as the first female principal at Mountain Pointe High School. Brenda, a McClintock High School Class of '74 graduate, worked at Corona del Sol and McClintock in the special education department for several years before transferring to Mountain Pointe. She started her time with the Pride as a teacher, and quickly blossomed in the role of administrator until 2008 when she retired.

“My home is right here,” Brenda said. “It always has been and it always will be.”

Keith Brown was a standout tailback and cornerback on the football field during his tenure with the Pride under legendary coach Karl Kiefer. After graduating with the Class of 1995, he played for the UCLA Bruins, and later went on to play with the Arizona Cardinals and the Denver Broncos. He now serves as a firefighter with the Chandler Fire Department.

“I don’t care what I’ve done in my life, everything boils back down to high school,” he said, reflecting on his career post-high school.

Bart Walker, a Class of 1997 Pride graduate, took his persistence and determination he showed in the classroom into the world of business. Bart is the creator, founder and current CEO of Jack Grace USA, a speciality golf shoe company. He invented a customizable saddle golf shoe that uses Velcro and magnets to change the saddle’s color. The shoes also allow for the addition of logos of corporations and sports teams. Bart runs the business with his wife Erinn, another Mountain Pointe graduate.

“This was designed to highlight the public speaking skills of our students and show their research and writing skills gained through their English classes,”  said Ian Moses, Hall of Fame director.

Members of Culinary Arts prepared and served dinner, while guests enjoyed performances by the Pride’s current choir, orchestra and the step team.

“Though we will be recognizing four individuals worthy of the honor, it is also an example of the great things that our students accomplish everyday on our campus,” said Moses.

The honorees were also recognized at halftime during the Varsity Football game against Highland High School.