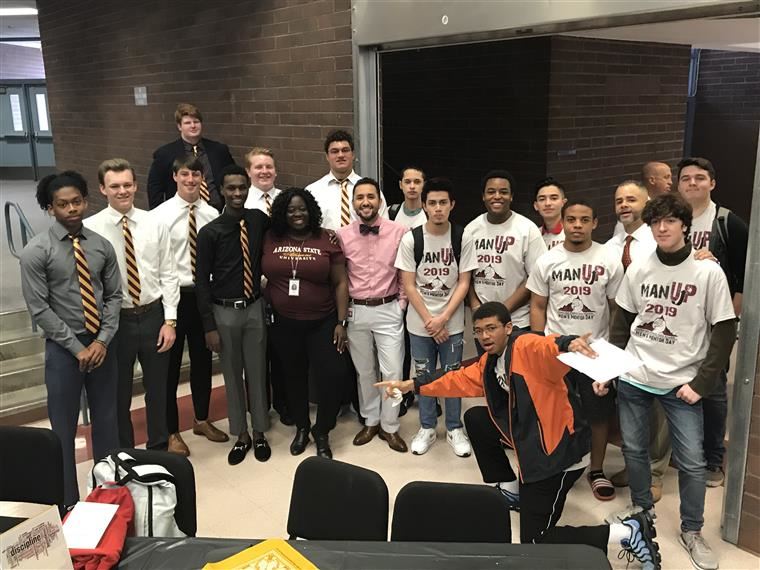 Mountain Pointe leadership held its first ever Men’s Mentor day, partnering 100 students with professionals in a variety of industries to discuss values, leadership and personal goals.

“(Today) is to start that foundation of what it is to be a mentor," he said. “Today was that day to break ground, be a little transparent with ourselves.”

Students broke out into smaller groups for condensed sessions lead by guest speakers with backgrounds in athletics, business, science, finance and government.

“We wanted to take it a little deeper and talk about certain core values: integrity, courage, having impact, service for others.”

The 100 men who participated in Man Up 2019 will continue these conversations throughout the rest of the academic year.

Nathan Ward, a junior and a member of the Mountain Pointe Varsity Baseball Team, said his biggest takeaways were to be inclusive of others on campus, and to continue working on his skills to lead a team.

“I kind of think that the underclassmen look up to me, and I need to be a better leader,” he said.

Malcolm Prescott, a junior, said he feels motivated to express himself more and communicate more openly with others.

“I think about life in a different way,” he said following the day’s events.

Prescott said he set a personal goal to attend college and pursue career in accounting.

Mountain Pointe junior Wakeem Price said the conference was a wake up call to get organized.

“The life I want to live is very demanding of me, and I need to give 117% into everything I do, unlocking the more genuine side of who I am as a person,” he said.

Lauer said he wants to see the program continue to grow, and to continue to encourage and inspire young men at Mountain Pointe to pursue their dreams.

"The goal is to do it next year with another 100," he said. "The goal is to try to change the culture and attitudes of this campus and our community."